Today was actually the first foot steps onto the Antarctic Continent. We landed at a spot named Brown Bluff. There is a large adelie penguin colony there, and a few gentoos mixed in. The rimrock cliffs were amazing, not at all what I expected in Antarctica, since they looked more like the rimrock along the Crooked River in Crook County, Oregon. Just a reminder that Antarctica IS the world’s largest desert.

It was a wonderful, leisurely, sunlit three hours ashore. We were able to walk at will among the penguins, or sit on the lee side of a sheltering rock, soak up the sun’s heat and watch the antics of these tuxedoed clowns. They were so hesitant to enter the surf, passing en masse along the shore until one would suddenly enter the water and there would follow a small penguin avalanche into the waves. They were out again soon.

The most exhilarating portion of the trip though was the zodiac ride back to the ship. The winds had begun to kick up, and you could spot little williwaw’s dancing out across the open water. Nine of us boarded into Brett’s boat and headed to the ship. While out in the open, the winds really began to kick up and we had a bit of a rodeo ride, and a brisk saltwater shower as we neared the gangway. Brilliant spray soaked us well through. I would gladly buy another ticket for THAT rodeo ride. Yeeeeeehaa! Back aboard, Cheli, or expedition leader announced that they had readings of winds at 97 knots during the return. I am in awe of this crew and staff.

I am in awe and jealous. I have always wanted to go to the Antarctic. What a fabulous trip. I'd love to hear more about how you got to go. 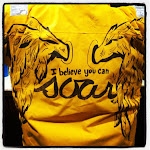